Innovations: The Key to Progress

Innovations: The Key to Progress

Innovations in our society are rapid and are often a source of disruptions. But to compete and win requires advantages over your competitors–to be faster, cheaper, and more accurate. These superior positions necessitate innovations to give you that leading edge, the winning position.

On the other hand, continually doing tasks the same way year after year is comfortable. It feels safe until you realize that your current processes and tools are not working. Suddenly you are not winning enough contracts and your revenue is falling. Panic is becoming the norm.

Innovators are typically early adaptors of new technologies and processes. Professor Everett Rogers published a book in 1962 popularizing the theory Diffusion of Innovation. Rogers explains that diffusion is communicated over time within members of a social system. 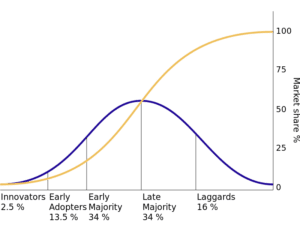 Consumers adopting the technology shown in blue and market share in yellow.

In a technology adoption lifecycle study by agricultural researchers Beal and Bohlen, they found the following:

I have seen some of the same adoption patterns with my software products over the years. For myself, it all started when I was tasked with breaking down a 150-page, profoundly complex DoD RFP manually.  I found this process agonizing and boring, and I realized that shredding/parsing an RFP could be automated. In the late 1990s there were not any known RFP shredder tools on the market. So I went about creating one at nights and weekends; designing, testing, and developing a shredder/parser engine. Then in 2004, I released one of the first successful RFP Shredders/Parsers (The RFP Analyzer).

However, for others, fear prevents them from trying new technologies and processes.  It is that unknown that can cause some people to hesitate and procrastinate leaving others to seize the prize.  So how does one overcome this fear of innovation?

Most of our customers were highly educated and more risk-oriented. These innovators and early adopters had given themselves advantages over their competitors by breaking down large RFPs and identifying requirements within minutes vs. days using automation. They were able to focus on the technical writing for their proposal, while their competitors were still manually breaking down the same RFP.  Their result was more wins with better and compliant proposals.

In 2014, I released a new software shredder tool, but this time found existing competitors. This changed the landscape and dynamics from what I saw in 2004, with a broader demographic of customers. Over time our customer demographics have continued to widen. Now I am seeing Late Majority adopters who realize that their competitors are using our tools and gaining an advantage over them.

Atebion, LLC, (my company,) drives innovation by developing new technologies and creating new software tools. The adoptions of these tools within our primary software package (Professional Document Analyzer) follows some of the same adoption types in the lifecycle study outlined above, but also noticed other factors:

However, for others, fear prevents them from trying new technologies and processes.  It is that unknown that can cause some people to hesitate and procrastinate leaving others to seize the prize.  So how does one overcome this fear of innovation? For myself and Atebion, LLC, it is by using a continuous learning model. We continually measure our results and seek ways to improve. We find what works and what doesn’t. We are constantly innovating, creating, and testing proofs-of-concept, which leads to new software solutions. For you, this can take different forms, from learning new technologies and processes to buying new software solutions/tools and services. We also use continuous learning for improving our software, which helps us to determine what new capabilities we should develop. Companies with a robust continuous learning environment outperform their competitors in innovation, productivity, and profitability. I suggest that if your team or company does not currently use a continuous learning model, look into implementing it.

“If I had asked people what they wanted, they would have said faster horses.” Henry Ford

Great innovations necessitate imagination, being able to see beyond what your clients/customers tell you. To get that extra edge (the bleeding edge), you need to truly understand their pain. What are their pain points and how can we give something that will cause them to say “Wow!”?  You want that “Wow!” effect to hit them hard–so hard they will only use your products and services. Only through true innovation and continuous learning is this possible.

Being average is boring; anyone can be average. If you want to win proposals, you need to stand out as unique and superior and show your clients/customers that you are focused on their success. Innovation is the key to winning.

The mission of the APMP-NCA chapter is to support our members in advancing their professional goals and increasing their capabilities to win business.